Listen to the full Ghostcast:

For Halloween 2010 - as part of our Halloweekend celebration - we interviewed local paranormal researcher Matt Laura about his experiences and beliefs regarding the ghosts and the paranormal. A decade ago, he and Bryce were part of AAPRO (the Ann Arbor Paranormal Research Organization) and repeatedly investigated a local legend - the abandoned Scio village graveyard.

Nestled in the forested and under-developed region of southeast Michigan known as the Huron River Valley, about 7 miles northwest of the city of Ann Arbor, lies the location of a place long since lost to the flow of time and change. Where there now stands rows of oak and walnut trees, a new manufacturing plant and a few houses, there once was a small town named Scio. 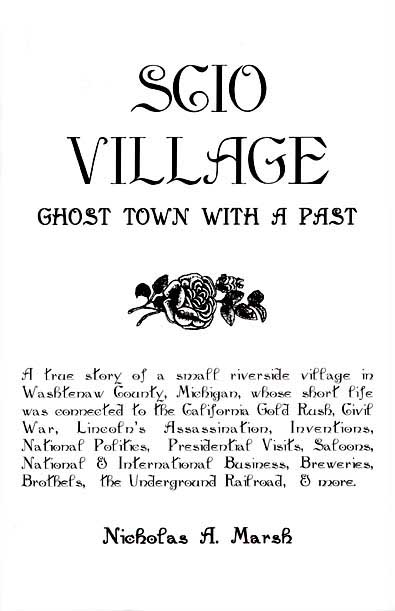 Like many small farming villages in Michigan, Scio village was eventually abandoned. The local historical society tried a couple times to restore the village's cemetery, but didn't have the funds to do much and the area became overgrown. The headstones were apparently vandalized in the 1970s.

Now there is very little left of the area that was Scio village, as can been in the satellite photography of the region. You can see the original AAPRO map here - an animation that cycles between a period map and the modern layout of roads in the area. Today there's a small park in the area, but that's about it. The park does have a sign with a little information about what used to be there.

A local legend holds that a warlock (male witch) was killed for heresy and buried in the (now abandoned) cemetery. A tree eventually grew around the grave's headstone. As seen in this photo from one of AAPRO's original investigations (in 1998), there was some sandstone found in the roots of the tree. When we went back in October 2010, we could find no sign of this stone.

In early October 2010 the Taverncast crew showed up with Matt Laura to investigate. We spent nearly an hour wandering from spot to spot in the abandoned cemetery, finishing up a bit before midnight. As we toured the old cemetery, two of us were constantly taking pictures, and we had two separate audio recorders - an extremely sensitive digital recorder, and an older analog voice recorder.

After our short time in the woods, we retired to our cars to listen to the audio that was recorded and review our photos (and to warm up!). Not expecting much, we were amazed when we heard some seriously creepy whispery sounds that certainly none of us had heard during the investigation!

We've isolated just the anomalous sounds from the digital recording, and you can play them using the player to the right. Each sound is played once at its original recording level, and then for some an amplified and clarified version is played. There are tones and silence between each segment.

As heard on the show, we did record some EVP during our visit. You can use the players to the right to play both our EVP (from 10/3/10) as well as the older EVP recorded by AARPO in 2000. To help you find specific sounds, the key below gives the time at which each is played.

As we mention in the show, for all of the "whispery" sounds - none of the seven people there heard the sounds. Have no doubt that if any of us had heard such things, we would have at the very least mentioned it! We all have our theories on the origins of the sounds in the recording, but until we go back to the cemetery to investigate more, they will remain just theories about some spooky recordings.

During our visit, two of were taking pictures with Canon DSLR cameras. We each took dozens of pictures. Because it was dark, most of these are out of focus and not going to be winning any awards. However, there were a couple photos that had "anomalies" that are interesting. Probably both of these are due to the conditions under which the pictures were taken, but we'll let you decide. 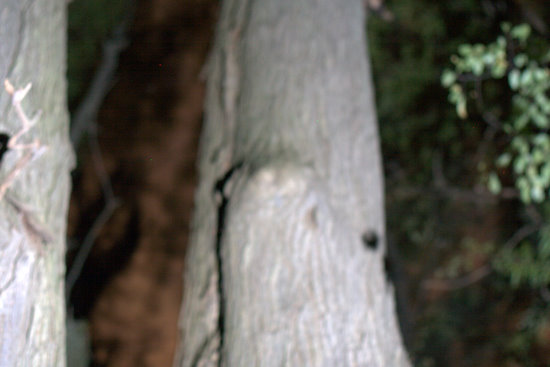 This picture includes an odd black circle/shadow on the trunk of the tree - likely a shadown caused by the flash, but it's not entirely clear what's throwing the shadow. 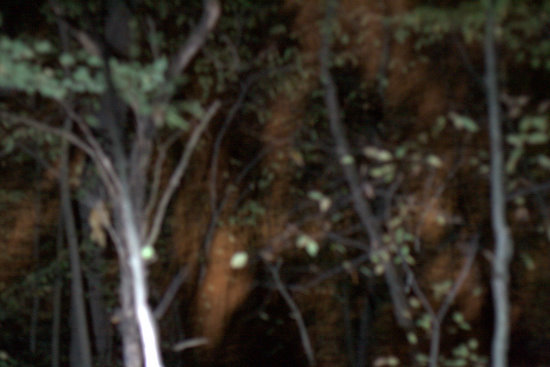 An odd reddish "haze" or mist is visible in the middle ground of this picture. 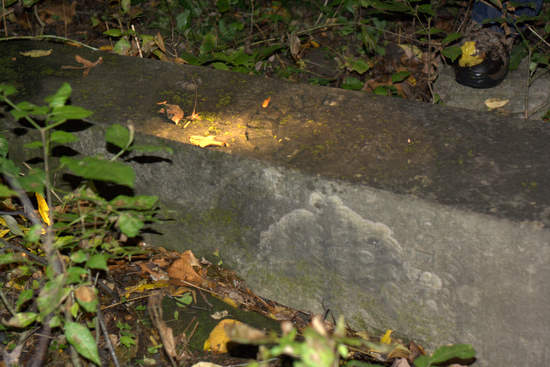 We've dug up the following pictures from the old AAPRO case files about the Scio Village cemetary.

An older picture of the "Warlock Tree" showing the stone in the tree.

An animated image showing the "red mist" that was photographed surrounding Matt on one visit. A higher resolution version of the image is here

Check back later - we're going to keep adding to this page with background information from the old AAPRO investigations, as well as pictures from our efforts.